Today was a really really good day for racing paragliders.... sadly most of this happened without my help as I crashed and burned early at about 40km for another schizophrenic performance.  Luckily for our team Russel and Khobi brought it home giving us hope for the team podium and with Russel close to the top ten.  So there is everything to fly for tomorrow.

I don't know how the race went down, but it sounds like the 90km course was joyful with cloud streets and lively thermals improving throughout the day.

Michael Kuffer won again moving him into top slot in the overall ranking.
Posted by Andre at 20:41:00 2 comments:

So the good thing about coming near to last in a task is that things can only get better as in Howard Jones (have a look at the world class mullet) or the more familiar D:Ream.  And what could possibly be better than stumbling across the line into goal with a really good mate for a one-two South African win.  Top three for Russel and I, first team, and second nation thanks to a strong rearguard performance by Jon.  I had a good talk to stupid-Andre during my walk of shame yesterday among the turkeys and then we just had it all our own way today for once and it felt good.  The lead-out points gave the task to Michael Kuffer by a single point from me with Russel three points behind.

Some superb task setting gave the field all the choice in the world in a 71km dog-leg task.  The whole field was a little gun shy after the grueling survival event yesterday which resulted in a precious conservation glide at the start followed by some medium racing once we were all emboldened by the better-than-expected conditions.

The course took us over Baixo which proved to be the crux as the entire field scattered faced with the choice of multiple racing lines.  My group decided on the northerly route which felt like a touch of convergence while most followed a more direct route and others went to the south enticed by higher terrain and brighter sun.

It was a mellow day with low stress and friendly gaggles.  Khobi was into goal a little later and Andrew landed short after making ESS.  The discards are working in our favour for now shifting Russel and I up the rankings.  Now if we can just hold it together for another day... 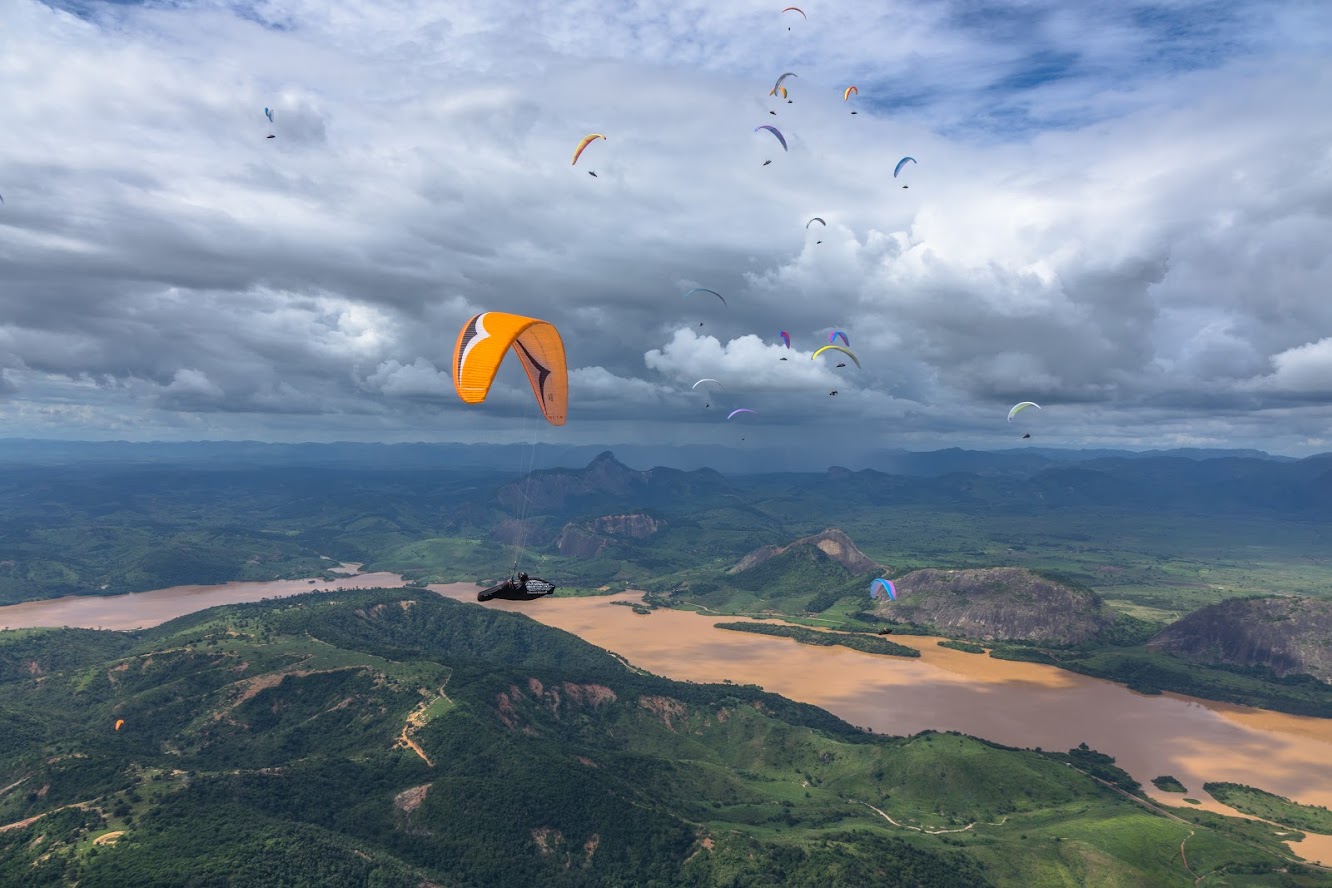 We woke to broken cloud and blue patches and a favorable forecast.  A race of 71km was set to the North on account of the fresh south easterly breeze.  It started with a bang and quickly turned into a whimper as the entire region was closed down by cloud cover.  Most of the field ended up scratching in light lift after the first glide for eternity. 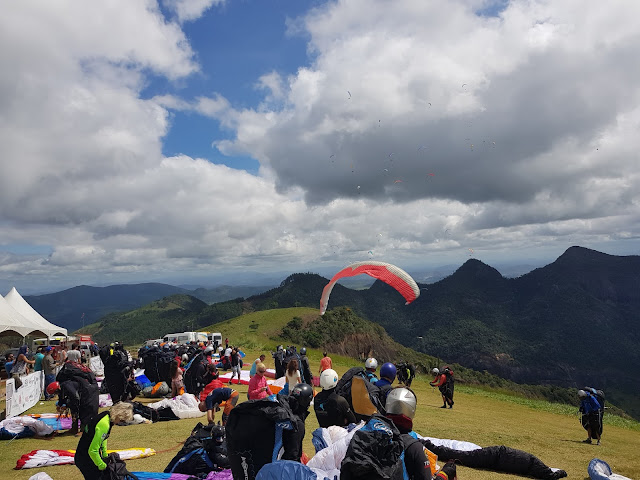 Yours truly managed to land early after scratching 100m off the deck for an eon.  I take great pride in the fact that I have never come last in a world cup task, but today was close!

To add insult to injury I had these turkeys for company as I walked the 5 km to town contemplating failure: 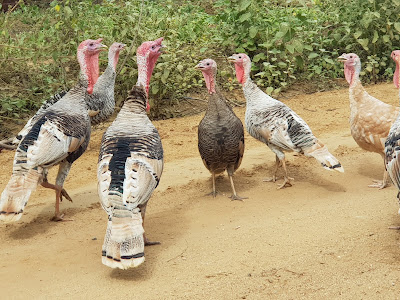 The rest of the field slogged it out dropping like flies along the course.  Some twenty pilots made goal after three and a half hours.  Khobi was the best of the South Africans followed by Jon, Russel, and Andrew who all got around 40+km down the course.

There is great optimism for the rest of the week.  Today will be a discard for most but there is little scope for errors seeing as we need four tasks to drop today seeing as 25% of your worst score is dropped for every flying day in the scoring system.

You could call it World Cup fever.  This is when the weather turns spiteful whenever the World Cup rolls into town.  Two days of intermittent showers have grounded us.  We did not even go up the hill on Monday because: 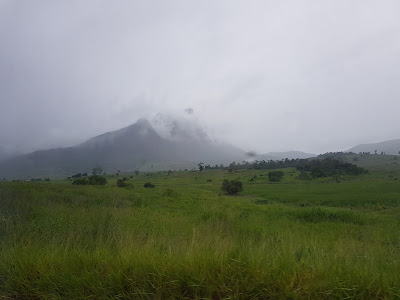 We went  up the hill on Tuesday which was interesting because the dirt road was muddy and the driver of our van probably had rally driving experience judging by the way he was drifting around corners and gunning the motor up steep sections.  We then sat around for several hours before the rain arrived.  The day was cancelled and then a ten minute window opened up just long enough for a bunch of pilots to bomb off and get chased by the rain and wind making for interesting entertainment.

This photo was taken by Dmitry Korolev during the first task.

This is the Rio Doce river which suffered a catastrophic environmental disaster in 2015 when a BHP Billiton tailings dam ruptured spilling a large volume of toxic sludge into the Santarem river valley.  The tailings contain extremely high concentrations of heavy metals such as arsenic, lead, and mercury.  The toxic mud reached Govenador Valadares within days where a 'State of Public Calamity' was decreed in response to the water shortage in the city.  The entire river is rendered toxic leading to water shortages with more than two hundred municipalities affected.  The spill reached the Atlantic ocean within weeks. The toxic mud is spreading across the Espírito Santo coast, where cities closed down access to beaches.  It will take decades for the heavy metal levels to return to normal and even longer for the river ecology to recover (if ever).

Those responsible will pay fines of $20 billion excluding personal liability claims and the cost of containment and rehabilitation.  Brazillian prosecutors have filed homicide charges against 21 people including top execs of the mining companies so far.

It is kind of weird to see these wide expanses of river without any people near the banks or a even single boat floating on its waters.
Posted by Andre at 03:45:00 2 comments:

Who would have thought a day that started doubtfully would turn out so right!  The deluge that welcomed us home in the evening before gave a cloud-base below the road on the drive through to Baixo in the morning with no fewer than three levels of cloud starting on the ground through the stratus into the cirrus.

We were trucked up the mountain at 8am to the launch site where the normal first day buzz permeated proceedings.   Many were doubtful until the sun sparkled through just in time to lift the wind technicians enough to get the racing juices flowing as one hundred and twenty pilots took to the air.

A sixty kilometer dog-leg task was set to the east for thirteen odd kilometers before a left hand turn to the north along the river past Baixo to a remote goal field guarded by a low ridge and a river crossing.

The start was sublime with conditions allowing competitors to climb up the side of the lower level clouds above launch before heading off on the course.  The pace was fast and furious with cloud-streets marking the way to the first turn-point allowing pilots to apply maximum speed to escape being sucked into the clouds.  The clouds were developing rapidly some 20km into the race in a cat and mouse game with rain chasing our progress.  My group managed to escape the rain mostly but others reported torrential rain thrashing their gliders in a cacophony of sound (imagine the sound of heavy rain on a massive plastic bag).

In the end there were fifty three pilots into goal with another twenty five making the end of speed section but landing short of goal.  I am proud to say team SA was second today flying under the Alas del Hombre  banner (The Mexican Mecca for Monarch butterflies and humans with wings).  We were sixth in the nations.  Both Russel and I were in goal quickly a minute or so behind the lead finishing in the top fifteen for maximum points.  Andrew was not far behind.  Jon and Khobi were agonizingly close landing a few kilometers short.

Michael Sigel won the day on a Boomerang 11.

It has been almost ten years since my first blog post in 2008.  I did a single post during a comp in May 2008 in Poggio Bustone, Italy.  It was only later that year when Andrew and I flew in the Super final in Brazil that we wrote about the flying properly (http://andre-comps.blogspot.com.br/2008/09/).

It is therefore a sweet coincidence to be back in Brazil with Andrew on the ten year anniversary of the blog, and on Andrew's 40th birthday in the same place (almost).  The comp was supposed to be in Castelo, but they moved it to Baixo Guandu at the last minute for 'political' reasons.

Our group comprises of Khobi, Russel, Jon, Andrew, and I.  This is the same team that went to the world championships in Italy last year.  Having said that, we are at a world cup!  The standard is higher, the vibe is relaxed, and the rules are different in a social kind of way.

Brazil has always been a popular destination for world cup pilots.  Baixo Guandu is no exception with the added boost of having held the Pan American FAI champs here last week.  As a result the field is pretty potent so we're looking forward to some stiff competition.

Baixo has a similar look and feel of Castelo and the rest of Espirito Dos Santos in that: the climate is hot and steamy; the terrain is lush green with massive weathered black granite domes rising out of the vegetation randomly; and it rains intermittently in monsoon mode.

The launch site is precariously perched atop one of these domes.

The practice day was sublime with clouds to the horizon and thermals marked by raptors.

I hope to bring you a lot of flying in the next few days.  Get the app if you want to follow the action or find it here.