So we got onto the bus early to go to another launch 2hrs from Denizili. Awesome place! 1700m launch above a flat valley ringed by low hills forming a classic racing amphitheatre .
Quote from Tamaga Sensei Nick Greece (see pic): 'the village has laid the red carpet out to gladitorial pilots of the world cup. It was difficult to utilise our ozone samurai swords as we were progessing at the pedestrian pace of 3km/h into the 'moderate' breeze. The thermals terminating in alien lenticular form.'
﻿﻿﻿﻿﻿﻿﻿﻿﻿﻿﻿﻿﻿﻿﻿
﻿﻿﻿﻿﻿ ﻿
﻿﻿﻿The debate on the radio was comical at best with the discard seekers calling level one (safe as a house) and the sane people shouting 'what part of 50km/h wave and lenticulars plus carnage on launch are you not getting?'.  One meet director, who shall remain anonymous, was overheard saying 'it is just a strong cycle' on launch one minute before cancelling the task. The village has pulled out all the stops to show us a good time laying on a great meal and entertainment.  A highlight of the evening was the turkish and fire dancing performed by one of the Russian pilots.
﻿﻿ 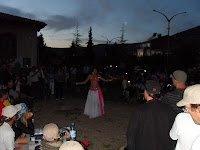 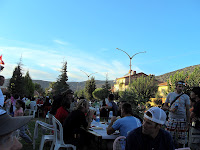 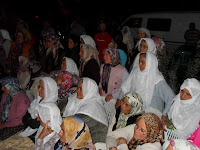 After some debate the task was revised to the NE goal some 60km away.

We used the lower launch which proved to be really messy and side-on requiring multiple launch attempts from many pilots with the customary hoist-off-your-feet and flapping bundles of glider on launch.  A capped speed run was the order of the day, but in the end it was a bit of a cluster with four pilots managing to punch through the 40km/h cross-wind to goal and the rest spread over the course line with 35 or so in the last 10km before goal.  A long retrieve saw us home before 8pm.  This task turned into a discard for most pilots. 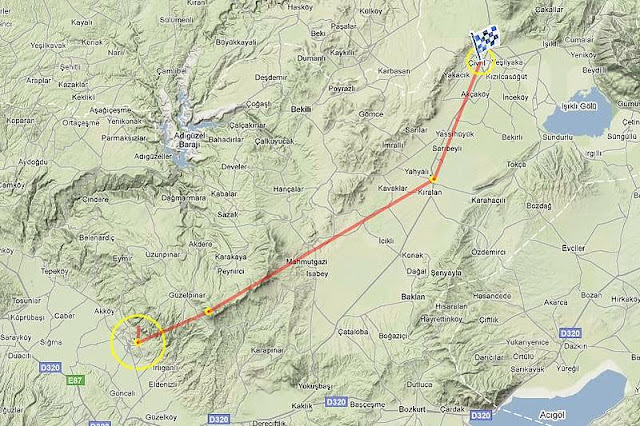 Another day of 10 - 15kt predicted wind so the task committee decided to test the hang gliding metaphor by setting a 107km task with half the distance into the wind.  The resulting glide test saw a third of the field landing within a couple of km of one another at the 60km mark with Alex Hoffer winning the day.  SA team still looking good. 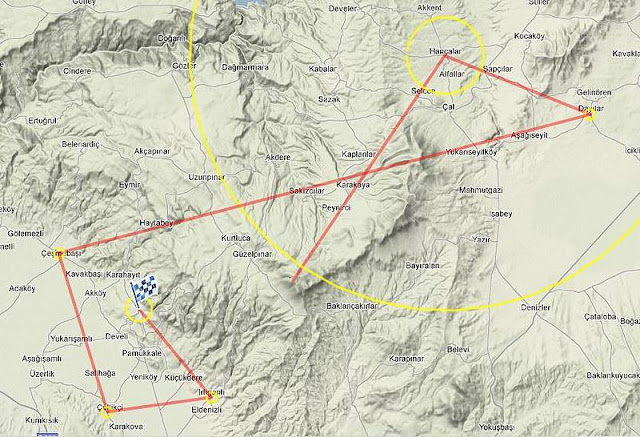 Another howling gale and then a task just before sunset.  63km crosswind task starting at 16H00 ande then 120 pilots flew to goal with the winner finising in 1hr 23min!  Today is the first of two discard days so it will be very interesting to see the leader board.  Russel got in top 5, Nev landed short and I was a minute behind the main group.  Lead-out points will be interesting.. 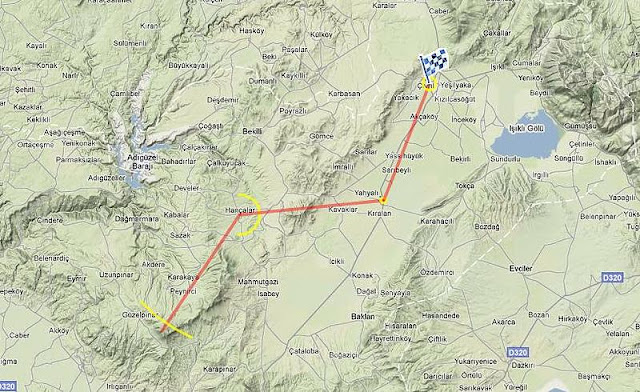 Sweet and Sour Turkey
A howling gale on launch had us all huddled around the chai pot muttering about how long before they would call it off.  Two hours later we launched and flew a 63km task in blistering pace of 41+km/h.  Freaky man!  I guess it was too much to ask given the luck of yesterday, but I was styling with 20km to go with a glide of 8 required and just when I was adding up the points I cascaded to a glide of 10 losing forty places (five minutes) on the lead nursing the glide through the last two turn points with absolutely no hope of a climb in the stable valley.  So here's the thing all ye Ozone owners... don't let go of the red things if you're goin' 60+ because the wing disappears and then tries to get rid of the rider when it re-appears.
A massive cravat and two twists required three clumsy full stalls to eventually fix and unwind.  Another day which had almost one hundred pilots in goal with the first 50 separated by 6 minutes.  The strength of this field is absolutely mind boggling.  Any sub-optimal micro second of blunder is punished out of all proportion.  I am clinging onto 5th overall with a discard in hand should we get a third 1000 point task which is good news.  The whole discard thing is pretty cool because many of the pilots languishing in the eighties could be leading overnight if they can put a good task or two together in the coming days.

The day was won by Luc Armant on a dark blue Ozone proto which is reportedly stable @ 65+km/h.  Alex Hofer(Ozone) was in second with Taro Kobayashi(Gin) in third a few seconds behind.  Another 7 out ten 10 for Ozone with Gin looking strong and only the Valic brothers in the top 20 for Niviuk on the day.  The picture looks the same for the overall standings at the moment with a lot of flying to come! 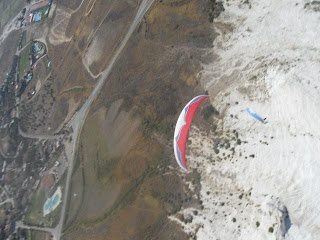 Superfinal Turkey taks 1 from broers philippe on Vimeo.
Posted by AndreR at 14:58:00 No comments:

The day dawned breezy and chaotic with the normal first day of organisors confusion amplified by over eager pilots. A 71km round-about RACE was set which saw the lead change once or twice. A personal blunder of laughable proportions after the start proved to be fortuitous at the crux which gave my lag gaggle of 5 chasing pilots an advantage shortly before the 15km final glide where we took a dusty to cloudbase and stuffed the bar into the stable valley and customary sea-breeze-into-wind finish. I took it by 12sec from NickG with the first 50 of 97 in goal within 10mins with Nev and Russel both in the top 60.. so a great day for the Africans! Still wonder if paragliding is a Game of chance sometimes. Whatever the case, I'll take it thank you. 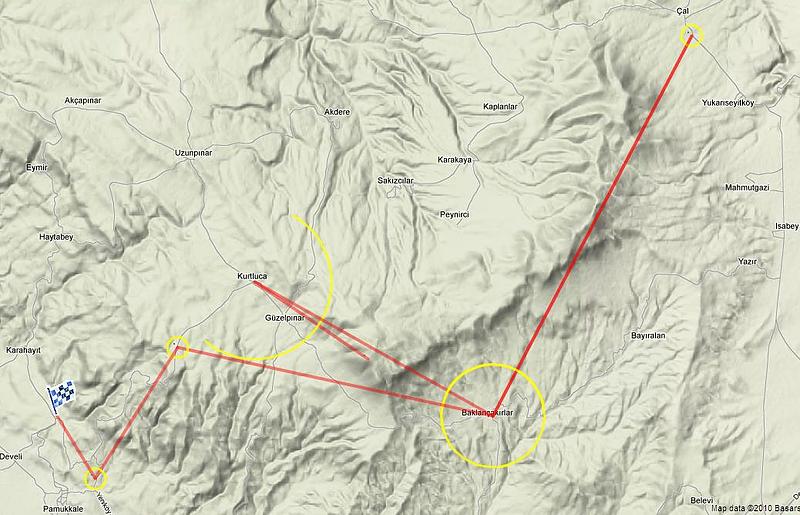 All dressed up and no-where to fly. Sat on launch all day waiting for wind to come up the front. A few got off in the lee but did not look so good. A hand ful of test pilots were tying knots into their two line protos in the bushes which was comical. You can add axis and sol to the two line mix and we almost have a full compliment of 2 liners!
Sent via my BlackBerry from Vodacom - let your email find you!
Posted by AndreR at 08:11:00 No comments:

The bus fetched us from our doorstep and took us to the top launch today which is around 1,500m+ ASL. The valley was heavily inverted far below. We eventually got off the gravel launch to climb to 3,000m+ which was where the second inversion ended. One or two guys reportedly got through that inversion to about 3,400mASL. With mellow thermals of around 2-3m/s everyone boated around until eventually going on an extended glide into the valley which was dead still. I have seldom flown in such laminar air so I took the opportunity to pull straps on the harness and figure out different trim/speed combinations. For those interested there is about 6-8km/h difference between trim extremes and the glider accelerates by 20-24 km/h at the ring stoppers with trims fully out. I never really believed it but now I see these ships really do get close to 70km/h flat out. More interesting was finding the best accelerated glide combinations which are not where I had assumed they were. The sink rate increases sharply beyond a certain point moving from -1.5m/s to -2.0m/s in an inch or two of travel on the speed bar or trimmer. All in all a great day of picturesque flying made all the better by landing behind the hotel and packing up on the marble tiles of a cavernous airconditioned anteroom. 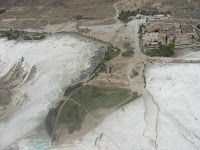 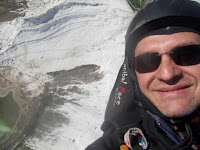 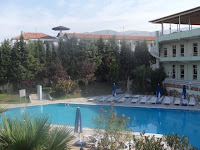 Ozone vs the Protos
The mountain was abuzz with glider talk. Mac, Gin, Niviuk and Advance all have two-liners here in numbers and Torsten arrived with a Swing hot off the production line. Chirp of the day (heard on the bus ride up the hill): "Gin is making a better R10 than Niviuk". This raised a chuckle or two, but the truth is everyone is excited at the prospect of new and improved gliders being showcased at this event. No-one I spoke to really knows what wings Russel and Luc have brought to defend their title with. Consensus opinion seems to be that it will be pretty good whatever it is (doh!). Luc was walking around the launch handing out new UV protected AR1 & 2 lines to all Ozone pilots which I thought was pretty cool given that my main lines would probably have been up for renewal after this comp. 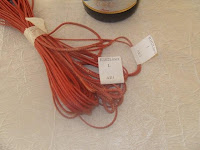 Another Epic competition looms in the form of the super final. This is where every former world cup champion and all 'legends' get wild cards along with the top fifteen of each qualifying event during the year. There are three SA pilots attending: Nevil, Russel and I. Russel qualified in Brasil and Nevil got a wild card on account of his world record and I qualified in the US in August. Nevil has been here for a week where he flew in the Russian open finishing second. We will pick his brain when we catch up with him.
The travelling proved to be a little tedious but after 32hours (JHB-DUBAI-IST-DEN) we finally arrived at the grand hotel Sevgi which is in the town of Pamukkale which means "cotton castle" in Turkish and is situated at the base of the mountain which features two launch areas (low + high). The cotton castle is framed by an amphitheater of pure white calcium carbonate precipitated out of the thermal springs over the last 14,000 years at a rate of 1mm per year. The ancient city of Hieropolis was built on top of this 'white castle' which is a Unesco World Heritage site. The calcium deposits harden into the sedimetary rock known as Travertine. Huge open air baths hold the super saturated hot water which gushes out of the rock at around 30degC. The entire complex is lit up at night which accompanied by the exotic sounds of turkish music and nocturnal fauna provided a novel backdrop to our first evening meal of spicy donna kebab and Efes beer. 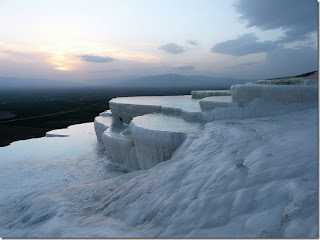 The pools of Pamukkale