Jack posted his opinion about the class debate on the forum half-way through the comp which was well received I believe. There has been a little pressure from several groups suggesting I say something too... Jack said it all in my opinion.
The only tiny bit I would add relates to the deep resentment I have for ill considered decision making by bureaucratic neophytes who ingratiate themselves into positions of authority and subject pleasure seeking innocents (like me) to their warped world-view in the guise of our 'best interests'.
I have a scooter. It's called a BKing. One hundred and eighty horses of naked screaming Yoshimura outrage at the back wheel. Zero to 100mph in around five seconds and a top speed of close to 200mph. I use it every day of my life because this is my commuter vehicle of choice. Over the top I know, but here's the thing... I don't go 200mph and I seldom do 0-100mph in 5 seconds. Once in a while I red-line the first three gears. Mostly I weave my way defensively through the traffic at a sedate 30mph. Forty thousand miles of commuting in the last five years and I am (still) well aware of my limited ability on a motor-cycle so I never lift the front wheel more than a few inches above the road and I have a quarter inch of sissy strip on the rear tyre. I wear boots and body armour and my helmet is 5 star rated. My life insurance is generous and paid up.
I have massive power and speed at my disposal and, as long as I don't break the law, no-one interferes with how I use it, NOT EVEN GOVERNMENT OFFICIALS! Not so with paragliding, but I tell myself it is only a game...
Surfing is a passion of mine. I was never very good in the competition sense, but I rode (relatively) big waves in the eighties and nineties. There were several occasions that my very good friend Ben and I found ourselves under-gunned and outclassed by massive moving mountains of frigid Atlantic ocean. There is nothing quite like snaking down a fifteen foot face of a heaving outer Kommetjie left on a short board before spinning out in the slot and taking a two minute wash under the set. I was a sea Point local for a while so I had 10ft Rocklands, Queens and Thermopolis under the belt which are all fairly heavy breaks. We never paddled out at Dungeons or Crayfish Factory and I doubt I could have surfed Big Pipe or Teahupoo so I don't know how far we really pushed it surfing. I do know we were supremely fit and strong but often hypothermic, de-hydrated and surfing in places beyond our ability on inadequate equipment. Not very smart i know, but guess what? We survived ten heavy years and no-one ever interfered with our surfing... Not so with paragliding but I know it's just a game...
I could go on and on about all the other dubious activities others have participated in from time to time: from drunk driving to solo rock climbing and BASE jumping, speed flying, extreme skiing, Alpine XC, spear fishing, marriage and parenting. The thing that matters to me is that I did some of these things with the full understanding of the risks involved and I mitigated these risks by developing appropriate techniques and strategies. No more so than in learning to fly open class paragliders safely. In this I feel I am competent having practiced high speed paragliding for years. I don't need someone telling me how to do this!!! It's just a game.
I have resisted posting this piece until after the comp because I accept paragliding is just a game and not really a metaphor for life but more an escape from reality and a healthy tonic in a stressful world of commitments and obligations... Why I feel the need to compete all the time is another matter altogether.
...and yet I can't shake that niggling feeling that 'they' have defiled our sacred ritual and trespassed on the holy playground of our sanity. They poisoned our dream of 'free' flight by assuming responsibility for our safety. Uninvited, unwanted and without consultation.
It remains a game and it was never truly free in competition.
Posted by AndreR at 02:15:00 5 comments:

A 79km task starting on Piano on to la Pila before a milk run under the convergence to B15 and back to B10 before finishing over the lake. Peter Neuenschwander has probably taken it from Jean-Marc and Charles. Petra will probably win the ladies from Seiko.
All in all a fantastic competition.
We are leaving early in the morning so this is my last opportunity to post a message. Thanks to all of you for the support.
Posted by AndreR at 14:47:00 No comments:

A grueling task of 120km was set. Starting 13km from B23 north east of launch back to la Pila with 50km out and return past Llana to the east and ending on B43 and Torres plus goal. I think UliP won it and handful couldn't finish after ESS.
The start was really lovely with most of the field soaring up against the clouds well above base. The lead changed half a dozen times during the day and no surprises seeing 40 or more pilots rocking home within minutes of one another.
NEWSFLASH: It was my turn for a blow-out today pushing full bar on the tree line in the lee of Maguey (stupid move I know... there are limits to what you can get these things to do it seems). The glider dived forward about 30deg and pretty much stopped flying in what looked like stall configuration with the wing tips forward and the glider concertina with slight flapping. The weird thing is it went straight to stable stall above my head without the usual flop-behind-your-head maneuver. I was on the B's all the time and I knew I was too low for my reserve so I just released the B lines with the intention of spinning into the trees if it didn't work but the glider continued flying on course without much pitch at all turning an 'Oh my gosh(substitute any appropriate profanity)' moment into an 'Oh Wow' Occasion.
OPINION: I know it's premature to celebrate the stability of this wing, but if this is the future of EN D then we can all give a huge sigh of collective relief and look forward to this new class of EN D wing. I still prefer to fly my R11 in competition, but if the lunacy of FAI/CIVL bureaucratic bumbling continues and the IP6 proves to be as benign as I am thinking it is, then everyone will benefit.
I would only hold my breath a little longer while we wait for the SIV junkies to test the stall recovery, but this glider is starting to shape up as superior to old school EN D kit in every aspect worth a mention including safety. For those of you who think I'm full of BS consider that I flew the Peak 2 in similar race conditions a month ago in Porterville with the same willful disdain pushing the speed bar in anger all day whilst hanging onto the B/C lines through the turbulence and I took MANY MORE HITS on that wing.
PS. For the cynics out there you should know I paid full price for my IP6.
Posted by AndreR at 18:29:00 6 comments:

So!!! Turns out the Afro-Alaskan team from house 207 San Sebastian had some admin! Jack was the bugger who deployed on the wall spending 5 seconds under reserve. 'I threw it hard!' says the speed demon. BZ tested the stall recovery on the IP6 early on over Divisidero. 'Today is my day' said the man at breakfast. Never a truer word spoken in jest! Turns out the IP6 recovers well (if one event a statistic doth make).
Posted by AndreR at 20:04:00 1 comment: 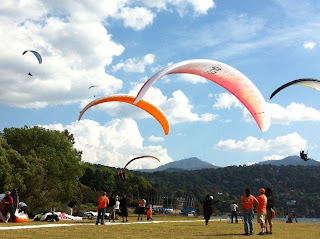 A proper Valle day with a decent task starting on Divisidera and then out to Aguila before Monarca via the crazy thermal area in the convergence. Then elefant and one more tp before ESS 5km from Torres. All looked good before a big gaggle went down on the way to the last tp before ESS. The survivors won the day. I elected to fly around the shadow that cut many short getting to goal 12 mins off the pace. Here's hoping the lead out points will shore up some of the damage. Jack and I had a super run out front with Pepe all the way to Aguila and back to launch before the pack chased us down.

Russel went down with the group after Elefant and I don't know where Jack is at. Also no sign of BZ...

We saw one orange Enzo stall out a cravat low on the Divisidera ridge shortly after the start. Pretty ballsy stuff! He got the thing flying after second attempt scooting out low over the trees before climbing out again. Funny how a blue hole appeared around the area of incident as 50 or more competitors avoided the area post haste!!!!

Then there was a reserve ride over the Mesa and another on the way to Elefant. We hope these people are all ok.

This morning is looking better/good. With luck we will fly a normal Rock 'n Roll Valle day!
Posted by AndreR at 08:11:00 No comments:

So after a little para-waiting the day was canned so we flew back to the lake which was a challenge in itself in conditions reminiscent of the task yesterday. There was much swapping of gliders going on with some fairly interesting comments. As luck would have it, it cleared beautifully after most pilots were on the ground. I met Olivier Nef yesterday and asked about stall recovery on the IP6. He says recovery is 'normal'.
Not much else going on today. Hopefully tomorrow is better despite the forecast of more high cloud. Whatever happens, you can be sure we will be on launch or in the air all day tomorrow.
Posted by AndreR at 17:57:00 No comments: 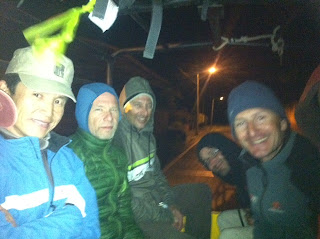 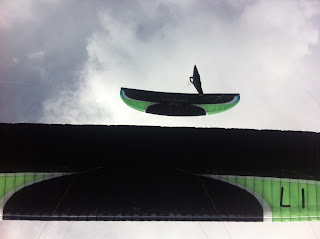 A desperate day of grovelling around 82km. A ten km start on Llana and then onto b27 with a eleven km exit and return before B30 and home. The field split as early as Llana with a small group going along the ridge to the south and the rest returning to Penon... The former group was a little quicker but in the late after noon gloom we all needed one more thermal to complete the task. More than half the field landed after 71-77km. Retrieve got us home late through dirt roads in the forest.
The leader board is messed up a little with yours truly sliding down significantly. Jack did us proud yesterday finishing top five along with Josh and Charles Casaux who won it.
Pepe Malecki jumped the start after setting the task with the committee. He was setting up his glider during the task briefing and did not hear the meet director change the start times. I feel they should give it to him, he has served us well over the years and it is a thankless job.
Posted by AndreR at 07:44:00 No comments: