Can you believe it? seven out of seven, still hot. Takeoff is awash with tourists and local pilots. The result... a circus. Airshow mentality prevails, and our ring side seats give us an uninterrupted view of the local pilots crashing into the trees both in flight and under reserve.

The day is looking strong and fast... probably one for the hot bloods. Pilots taking on ballast at launch. Andre are you ready?

And BOY! is Andre ready. He blasts into the lead on the 55km task setting a cracking pace with three others with the pack in hot pursuit. Andrew dawdles at the start and fights a rear-guard action along the cliffs and spines that constitute the course line. Andre is still on top in front with a crossing and 20km to go. He gives it full, gets the line and goes in a minute or so ahead of the rest.

Andrew plonks in a while later.
Cold beer in the after glow, and were speculating about the probability of both finishing in the top twenty. That would be pretty cool, but let's wait and see....
Posted by AndreR at 15:26:00 1 comment:

Another sultry day. Sweat dripping from the jungle that masquerades as Andrews armpit before the first cup of coffee is consumed.

After dicking around on the huge cliffs for a couple of turn points, the task takes us across the flats to the distant cliffs and valleys. Puppy styles the first few moves across the flats and to the 600m vertical cliffs. Alas the fan was off so he ends up get retrieve out of the most astonishingly picturesque village on the back of a scooter. Jones does the tree kicking, cable dodging samba which he has by now perfected to get a reasonable finish elevating him to the rarefied top fifteen elite, punching in at number 13. Puppy takes a glide of eight down the ranking amidst some pitiful grumbling.

The 11kva web of power lines claimed it's first victim in the form of Renata from Czech. She sustained first and second degree burns to her legs on hitting well hidden lines less than five metres above the terrain. She is out of hospital and will be fine.

Bored on launch here's a new format. It' called mashing.

The morning dawned sultry and nothing dawned on the sultries despite the death like slumber. Hot and humid to start we got to the top of the hill and settled into the 'Shadow of the Wind'.

Darkness on the horizon turned into cloud beneath us eerily tracking the sombre tone of my novel.

A task is set in swirling darkness, my shades a shade too dark to see. Mine had to be removed as puppy blundered prematurely to ground. Most of the task is soarable up giant cliffs sporting military crops of still bigger trees. We chat together as we inch up the cliffs amazed that there are a hundred pilots making their way around the course (most ahead of us).

The day started in the teens for both of us overall. This equates to a respectable charge at the head of the weekend warriors. Today has warped that happy picture.
Posted by AndreR at 16:17:00 2 comments: 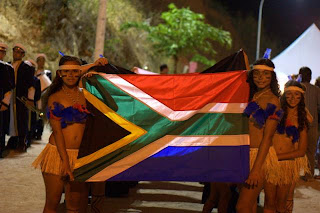 The General finally made an appearance after an epic retrieve from Boonville.
... and so, after a massively bungled start, the lesson is: Don't believe you can zero at the start perimeter with two minutes to go when everyone else goes back 1 km into wind for the climb.  The result is a sub optimal start (he means a complete cluster).  However, this allows one to climb unhindered at ones leisure observing the entire field plummeting into the stable sea air.  What goes around, comes around as is said, and within ten minutes of being the lowest and slowest, I could fly over the entire field to the front (low in the stable sea breeze too).  Hah! So much for being in the front, which now comprised ten pilots on the tiniest of ridges trying not to kick the cows.
It was fun ridge soaring.  after an hour or so, we could dribble over the back onto the steep rainforest and the bigger hills.  I have had worse times in my life, but that generally involved surgery.  Couldn't get goal in the howling wind though, and disappointed to be in the top 20 and not get any points due to lack of validation.
Posted by AndreR at 17:40:00 2 comments: 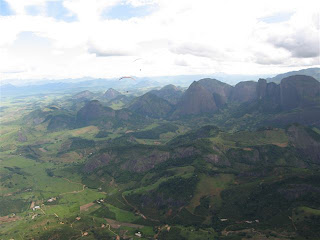 One might have hoped for a sane task after the excesses of yesterday. No
such luck I am sorry to say. Strong North AND strong South wind, so set
something crazy in the flats to the west where we can ridge soar 50m hills
in the howling sea breeze. I am really pleased not to be on the task
committee.

Now what was the thing about sea breezes? Uhm.... OH YES! Now I remember!
Stable air! I guess they have high expectations, but this is too much! Mind
you, some pilots may well have the luck we had yesterday and get through...
who knows.

Anyway, I managed to land in good company after groveling in a hole for an
hour. Weird to be able to fly 220m ASL for so long and not coastal ridge
soaring at Map of Africa.

News Flash! 9 pilots in goal, with the captain just 5km short! The mind
boggles at the depth of skill and experience in this field.

18H39 (GMT-3) Wed 1 Oct 2008.
Hot off the press after PWC committee meeting.
Latest about the 2009 world cup season in the new format:
Seven events which should give more of us a reasonable chance of getting a spot.
Valadares in March (Brazil), followed by Korea, Turkey, Annecy, Croatia with a super final in Poggio (Italian site of the first 2008 event featuring a 112km task).  The seventh event is supposed to be Porterville or Tucuman, but let's wait and see.  They want buses (as opposed to a cattle truck) in Porterville for retrieve.  Can't understand why anyone would need that in the 40degC blustery bliss that Porterville promises... but there you have it.  They also mumble about the size of Dasklip launch.  I have resisted the temptation to explain the necessity of the huge rock that blocks the launch being a shadow fixture that actually ALLOWS relatively safe launches when the south easterly blows.  Let them find out for themselves rather than subject them to some hard-to-grasp African safety concepts I say!
So the basic idea is to give more people access to world cup events and then determine the overall champ at the super final which will be an extended event of 12 days.  The top fifteen from each preceding event will get automatic entry to the super final with the balance drawn from where-ever (details a bit sketchy).
More news later.
Andre
Posted by AndreR at 16:41:00 No comments: