Why is it that so few have so much to say and the pilots in the majority are quiet with those who do venture to comment mostly come out in support of the comp organisers?  I was there and I feel I did nothing I ordinarily would not have done free flying.   Having a local monitor conditions for my benefit is a bonus and largely why I choose comps for cross country in foreign countries.  I would gladly attend any comp Mike puts on in future and I would trust him to do the right thing as far as my safety is concerned (again).  Any pilot dumb enough to require a level three call and an instruction to land during a world cup task does not belong.

For the record, the majority of the lead gaggle flew completely off-course out of danger on the last day to evaluate wind strength in the foothills before B52.  I know this because I went first and wasted close on an hour until I got a climb of sufficient magnitude to get safely over the mountain with Marina.  Personally I would have preferred to be on my R11 for the stability, range and speed, but that's another matter.


So knock yourselves out with your opinions, but take the time to thank Mike and all the tough mofo pilots like Nate, Nick, Russ, Nicole and Guy et al for showing us how to behave like real men and women.
Posted by AndreR at 13:39:00 No comments:

As most of you will know by now, Guy Anderson was found alive with multiple injuries.
It is turning it one hell of a story with some information here:
http://www.xcmag.com/2012/08/paragliding-world-cup-sun-valley-guy-anderson-organisers-statement/
When the whole story comes out I will write about it along with task summaries about the last two days including some video footage too.
Posted by AndreR at 15:11:00 1 comment:


Guy Anderson is missing.  I will update this blog when we know more.

I feel good 'cause I should and it was looking good, really good and then a simple little thing like twenty knots over the back spoiled the party for the sixty or so pilots who where @ 4,500m ASL.  A couple of nasty shocks, whirlies and one near miss forced Mike to pull the plug.  I had it (fairly) easy and after wrestling the python for about three hundred metres, I took an Yngwe Malmsteen shred elevator to the top floor.  Getting down was another matter all together and I had the opportunity to practice my PLF skills.  Two clever souls headed off toward Jackson and will probably do 250+km. 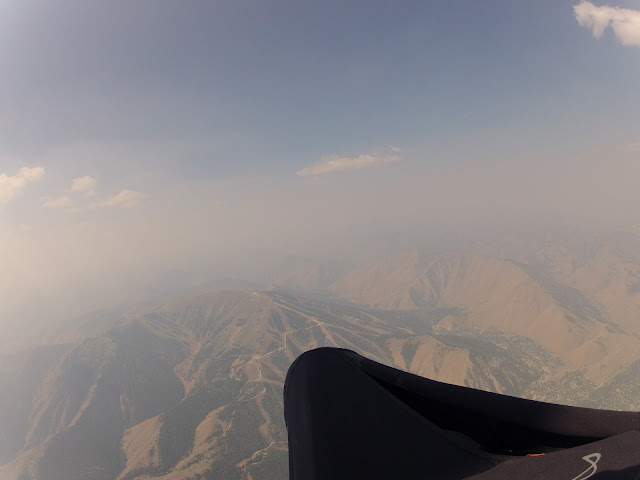 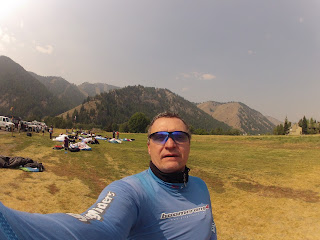 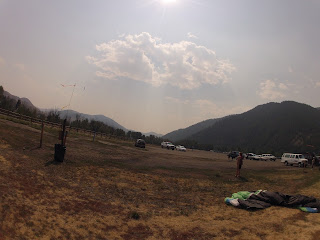 Day three was cancelled due to the threat of OD.

I have had many awesome paragliding experiences, so I won't bore you with comparisons suffice to say that yesterday was up there with the best of the best.  I'm not generally in awe of big distance for distance sake, but when you fly over the terrain we did yesterday in the spectacular conditions and with quality pilots I get terribly excited.

The task map provides hints but speaks nothing of the desperate isolation of Scorpion mountain; it does not describe the raging splendour of King Mountain; and it most certainly does not do the alien landscape crossing to Saddle Mountain any justice.  The fact that Nate and friends do these flights with nothing more than SPOT for company speaks volumes for the passion and commitment they have for the sport and the area (not to mention the balls they possess - I was wondering why they walk funny).

The start was a little dodgy in the sense that we ended up grovelling after the crossing from D01 to B07 which proved to be more challenging than expected with the 5mile airspace around B61(just off the bottom of the task map below) pushing us into the hills NE of the airfield. 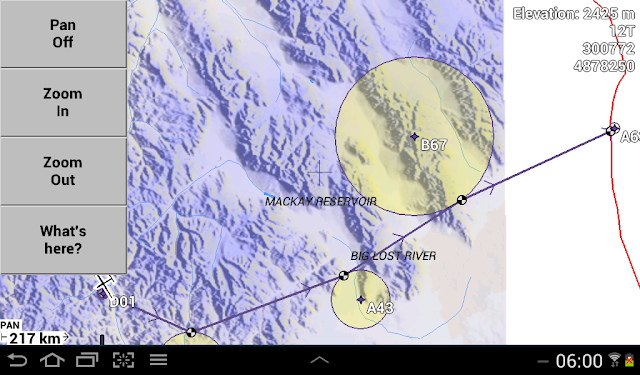 Most managed to grab B51 at altitude before going on an extended glide toward A43.  I lost touch with the lead along the way with a dubious choice of line.  The lead changed several times on the way and A43 turned out to be crucial with the bulk of the lead group flying south of the course line to the spur leading north to King mountain (D02).  I elected to fly alone (for some unknown anti-social reason) and ended up flying alone for the better part of an hour before hitting the monster thermal at the foot of the King mountain pass.  This thermal somehow elevated me from mid field to the back of the lead gaggle which had fortuitously slowed up contemplating the crossing to the diamond peak mountain range (B67).  We did the crossing almost exactly on the course line.  It was great to hook up with Wagga, Raul, Russel, Urs, Mike, Dean, and others who all worked really hard together to milk the last few lines of lift while going out into the flats with 50km left to go and a required glide of twenty or more.  We were bullish about completing this gargantuan task for a while with signs of convergence/streeting setting up.  All too suddenly the day switched off and within 15mins it was clearly over and we all went on the mandatory death glide landing tantalisingly close to the elusive goal.

See video below or for HD version go to http://www.youtube.com/watch?v=9I3yCTZGCUU

This must be how big game hunters feel when they come to South Africa to bag one of the big five (although I felt more like the prey on several occasions).

195km of sheer thrill.  An absolutely incredible day of flying yesterday.  No one made goal and it took 8 hours to get back to HQ in the wee hours crammed into the the retrieve vehicles like sardines without a single complaint should give you some idea of the general sense of euphoria among the competitors.

Six hours of leap-frog racing through some very heavy moon country with several crossings left a group in front at cloudbase 50km from goal.  I was reminded of a couple of tasks in Chelan..

We have to go up the mountain now, I will publish pics, video and a blow by blow account of yesterday's task for those interested.... 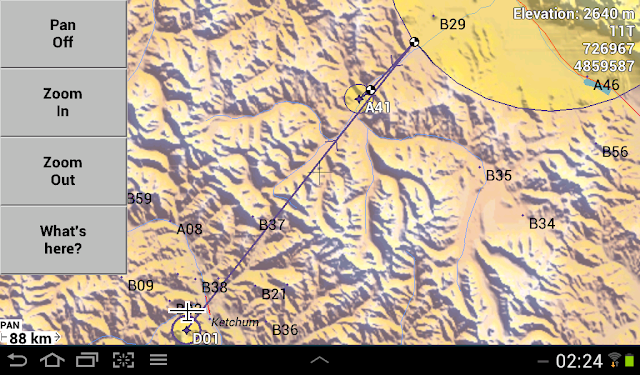 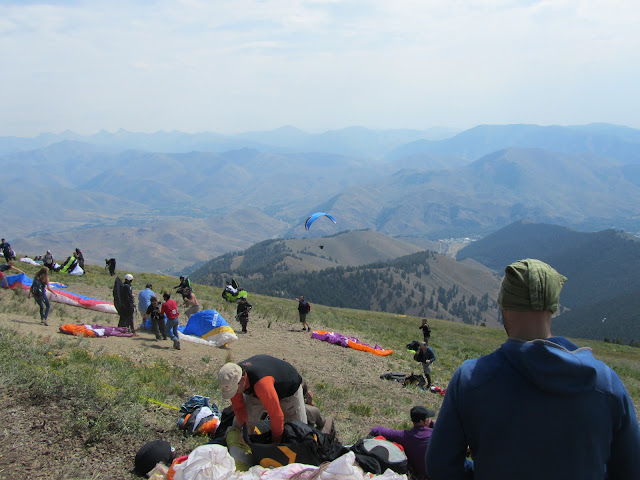 Pics are by Nick Greece flying from King Mountain two days before the comp
Posted by AndreR at 19:52:00 1 comment:

Yes friends we are in the spectacular resort town of Sun Valley in Idaho 4hours North of Salt Lake City in Utah (pronounced 'Yew Tar' for those of you unfamiliar with the South West) where you can ride your Harley without head protection while wearing your side-arm in plain view on your hip.  You can even purchase an AK47 at gun shows I was led to believe although coming from South Africa I cannot imagine why I would want to do that let alone contemplate the challenges of importing an automatic rifle to South Africa.  I will just have to get one in Braamfontein where the going price is around R1,500 (< $200) I am told.
So you must be asking yourself: 'Why did he take a 15 hour flight (seat 74E) from JNB to JFK followed by a 6hr flight to SLC and a 5 hr drive to Sun Valley?'.    Well.... It's simple.  They promised us this:

Andy Macrae photo
At the risk of sounding critical, this is what we got today: 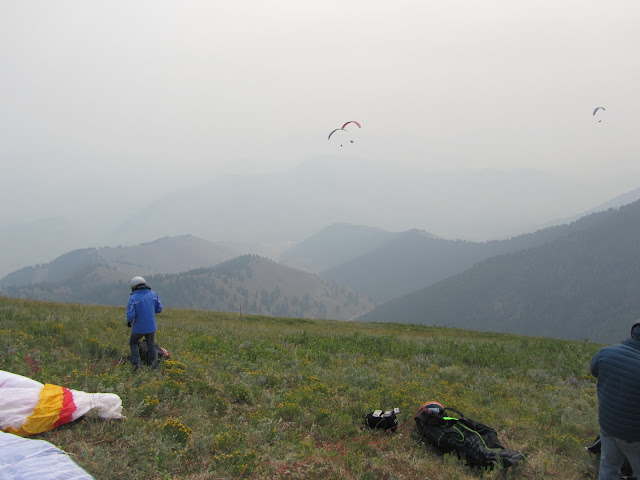 ..and so the curse of the world cup claims another victim.  No matter where we go the world cup has the capacity to provoke the wrath of the rain, wind & fire gods.
Sun Valley got a serious dose of the latter:

The resulting smoke cloud has reduced the fabled clear skies and spectacular views to a poorly executed rendition of Monet's soleil levant: 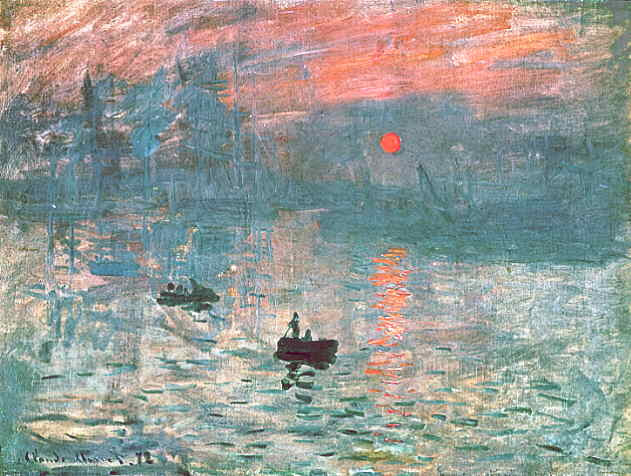 Don't get me wrong, I am a huge fan of impressionism, but just not when it comes to paragliding.

We set a 70km task to the north east through the murk and I owe an apology to Nate in that I doubted his optimism.  I was thinking he was nuts to suggest we would fly anywhere but down, and was pleasantly surprised to find myself at 4,000m ASL gliding blindly along the course line getting trashed on the spines as the valley breeze clashed with the met wind.  My vario reported 6.5m/s peak and 3.8m/s on the 10s average with brutal sink.

I wonder if the forecast is teasing us by suggesting it will clear in the next couple of days....
Posted by AndreR at 23:51:00 No comments: