Sorry no news for a while, and now the news is bad. Day six was a real bummer. One of the Swiss super stars, Stefan Schmoker, crashed on the cliffs behind the 'Finger' shortly after the start. I saw the whole thing from directly above and it was brutal. I was flying around the crash site with Helmut Eicholzer. Heli spiralled down and some how managed to land unscathed between the trees on a rock the size of a car on the cliff. HUGE respect to him! The rest of us lesser mortals cleared the area after the organisers came on the radio and asked everyone not involved to move off.

Stefan died after a couple of hours despite the desperate efforts of Heli to save his life.

Today was a rest day.

I will write some more about the flying when I feel inspired again. Sorry folks.

Have a look at Nevil's Valle movie on youtube:

We are in 21st position after 6 tasks

The day appeared more stable than the preceding days, but this did not deter the task committee in setting a challenging race. The convergence set up for three legs of the course making goal relatively easy if you got the first three moves right. There were reportedly four reserve deployments and some tree landings despite the apparent benign conditions. Henry is the only dissenter on that mild evaluation having witnessed countless ‘in-klappers’ and having managed to snag a fellow competitor in his lines. Nevil managed two cascade events for no apparent reason. He had the opportunity to observe the ‘finger of God’ up close while plummeting past said digit in a non-flying configuration. The ‘finger of God’ is Nevil’s pet name for the prominent rock out crop that dominates the front of launch.

Nevil got into goal in a reasonable time.
Andre got stuck after the second turn point which saw him into goal late.
Henry landed on the way to goal.
Desi got around three turn points.

Results are hard to come by, but you will probably find them on the official web site some time during the morning (SA time).

Day two faulty provisional results were not updated as at the time of this report.

This picture will change somewhat after they fix day 2 and publish todays result. 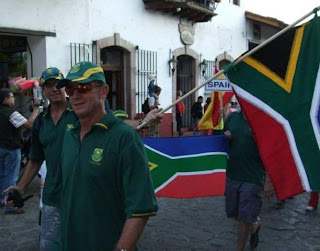 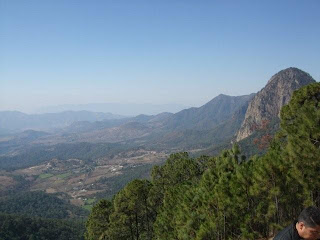 91km triangle with dog leg around 4 turn points and goal at a 1km radius end of speed section with a physical line validation.

Cloud Cover 3/8ths with cloud streets here and there.

The start was the normal cloud flying extravaganza that plays on the nerves like mustard gas.

The task was a step up from yesterday as it was felt that the 71km task was Mickey Mouse. The flight took us over numerous large valleys and canyons with three to four stranded powerlines in all the wrong places.

At one point the lead gaggle dived into the shadow on a koppie, and in good SA style Nevil and Andre Nevilled them and specked out 1km from the milling mass. The return race to the last turn point offered a choice of two routes no less than ten kilometres in separation. The last move after the final turn point had a bit of a sting with many unhappy pilots landing just short of goal as the day began to shut down. Probably 50-80 pilots in goal, but more on that when the results are out.

Henry and Andre got in with Nevil 200m short.

74km triangle with dog leg around 5 turn points and goal at a 400m radius of the radio towers above Valle.

Cloud Cover 3-5/8ths with cloud streets along the course.

This was a crowd pleaser if ever I saw one109 pilots made goal with the leaders taking about 2 hours. The meet director said this was a ‘typical’ Valle task which included a bit of flat lands.

The boys all got in with Andre a few minutes off the pace followed by Nevil and Henry a short while later. Desi did about 64km landing on a perfectly manicured lawn on some or other ranch.

The day was characterised by cloud avoidance at the start followed by positional jockeying until midway and then all out racing toward the end.

An added dimension of getting goal, is if you land within the last kilometre, you’re sure of getting wet in the dam. One of the few times getting goal 100m below is possible.

Quote of the day: “Does the sun come up in the east here?”

Not a bad start for team SA, the results are as follows:

Registration Is pedantic at these events. No one seems to mind as there is a buzz in the air.

Valle de Bravo is an ideal paragliding destination. The locals are friendly and enthusiastic. The town, perched along the shores of a dam which feeds the hydro electric plants downstream, is picturesque and bustles with cobbled alley-ways lined by dozens of funky little shops selling anything from intricately embroidered doilies and traditional ponchos to herbal remedies. Restaurants abound and the cars rattle on the cobbles in an endless and slow procession.

The opening ceremony had the SA ambassador to Mexico as one of the invited dignitaries which was a surprise for all of us. Mr. Mbete had no idea South Africa had sent a team, and we were puzzled to hear his name and title called out when the (interminable) speeches began. So after a brief introduction, best wishes and the promise of help should we need it, he gave us his card and left for Mexico city.

Baggage retrieval became an epic adventure into Mexico city, home to between ten and twenty million hombres depending on who you speak to.

I now have a deep disrespect for airlines and the dark arts of baggage handling. To cut a long story short, a six hour round trip with multiple dodgy pickup venues and two thousand pesos later, Jose Luis got us home at two a.m. With all bags accounted for.
Posted by AndreR at 19:08:00 No comments:

Andre, Marty & Desi reporting:
So who said Paris can handle baggage??!! We received half of all bags naively entrusted to Air France. The upside was the empty albeit ageing Airbus on the Paris-Mexico leg that saw us spreading out and colonising the aircraft. Air Mexico rocks man!! Tequila for breakfast lunch and lunch (yeah this timezone thing is a bit whacky). Desiree is like a little kitten, she just curls up on a single seat and sleeps like a baby. The rest of us giants squeeze into spaces like lumpy toothpaste.
Desi's luxury transport services suffered premature jet-lag with an amazing feat of bad date planning. Anyway, we're killing time (don't ask me which timezone is dying) in a restaurant drinking Sol and munching Enchiladas & Nachos. Our un-named driver is reportedly making his way to our current holding pen.
Quote of the day on landing in a cold wet Paris: "Why is it dark outside?" (Doh! it's 5am in the northern hemisphere genius!)
Now here's something weird:
At OR Tambo we checked in at counter number 69. Then we arrived at gate 69 in Paris before departing from gate (yes you guessed it folks) 69 to Mexico. Must be a Yin/Yang thang.
and here's something just plain scary:
The average age of the team is 45.4 years. That's a lot of experience one way or another. If we can just remember what we're supposed to do, and if just one of us can hear the briefing and see the map. That's why it's a team sport.
The other thing we forgot to mention were the two dragon lady air hostesses on the Air Mexico flight.
Here's a pic of them: 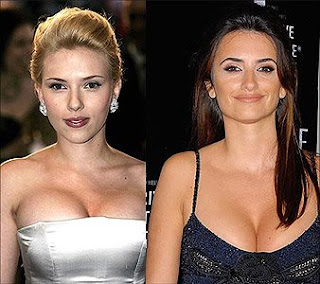 It's almost time to leave for Valle de Bravo. Armed with visas, hopes and dreams, my team mates and I are looking forward to the 24hrs of travel into the land of sombreros and tequila with mounting excitement.

In case you did not know Africa's Finest SA 2009 Protea Team (blommetjies): 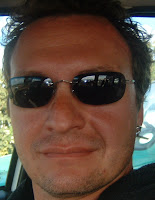 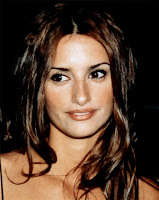 Desiree Pansi (sorry Desi, could only find this nasty one of you)


Some information about Valle here:
http://en.wikipedia.org/wiki/Valle_de_Bravo,_Mexico_State

and on the official Worlds site here:

Please let us know what you want to hear about by leaving a comment or selecting one or more of the 'We Want:' options below:
Posted by AndreR at 03:30:00 2 comments: