In an act of comic desperation a group of us that included most of the world cup committee decided to woo the thermal gods by staging a roof-top garbage and trash party the night before the second last day. It was agreed that if we succeeded we would be awarded special bonus points. It was a noisy affair of at least four thousand mili-watts supplied by a mouse sized speaker compliments of Pepe Malecki and amplified atop a rubish bin and driven by 'DJ Red' Russel and his iPhone (we got trashed on the rooftop to sounds amplified by a garbage bin.... hence a garbage and trash party for those of you too slow to get it).

It turns out that at the bonus points were not needed by at least one of our club as Russel smoked the field and won the task the next day!!

Russel managed to follow up that performance on the final day to end up second on the podium. Not bad for a first time world cup attempt I'd say. Finally someone new has come through from SA and delivered a convincing result at the highest level.

My own flying was a sad affair of no launch on the first task and a comedy of errors on the second. I will just have to go to Greece, Spain, Italy, USA and/or Portugal to make amends I suppose. Rough life of a world cup pilot :-)
Posted by AndreR at 01:55:00 No comments:

The rush up the hill was a little muted this morning with updated predictions indicating stronger winds than yesterday.
The task was cancelled after we began the inevitable foot-vote which is so often the result of the mortal battle between transcendental reality and blind optimism.

I guess I should say a little about Pocos de Caldas which is a mid-size city in the Minas Gerais province. If you're really interested about the stats go here: http://en.wikipedia.org/wiki/Po%C3%A7os_de_Caldas.

It is 'nice' enough, but it is hard to be positively subjective when there has been no flying.

The talk of new gliders and technology here seems to revolve around: the duration of Ozones' current advantage; and the protos from Gin, Niviuk & Mac. The casual consensus seems to be that Ozone is a minimum of 6 months ahead of any other manufacturer putting a production version of something competitive on the market (the failed PMA recommendation is widely interpreted as a confession by various players that they have no answer for the R10.2). After equilibrium is restored among the manufacturers the expectation is that the performance improvements will once again be minutely incremental as has been the case over the last 5 years with Aircross being the possible exception (again). Comp results around the world are confirming what we already know about Ozone, but the rest of the protos are all unknown given the absence of any objective data or opinions.
Posted by AndreR at 05:05:00 No comments: 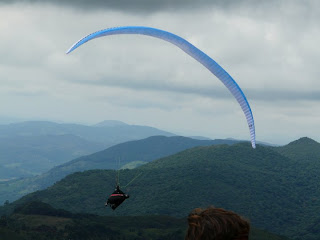 Did I mention it rains during the monsoon season?

The first three days were cancelled and the fourth dawned frigid and relatively dry. We finally went up the mountain in the howling gale and low base with great excitement and enthusiasm. A 55km downwind dash was set and cancelled after 40 or so pilots were pasted all over the sky like skinny post-it notes facing into the wind in perfect alignment at cloud-base.
Picture courtesy of Arnold Pansi
Several anxious calls of level three conditions along with the imminent probability of one or two luckless individuals getting blown over the back low prompted the decision to halt the proceedings. A little too hasty in my opinion, but maybe for the best. It was quite comical to see the new Ozone gliders ripping several individuals off of their feet. It seems new ground handling techniques are being developed with each attempt. Wind guru predicts lighter southerly winds for the rest of the week. Thankfully no rain has been predicted. 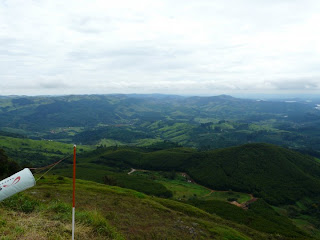 Humid and overcast as Brasil always seems to be we arrived after an epic 24hrs of travelling.
It is great to have so many compatriots at a world cup after flying 'solo' for so many years. It feels like a world championship without any of the bother.
The hotel has broadband! We managed to catch the Dam-style cable car up to launch which in typical Brazilian style has a lush green carpet of freshly cut lawn defining the launch strip. Cloudy with drizzle and 25km/h wind up the vertical face.
Pictures courtesy of Arnold Pansi 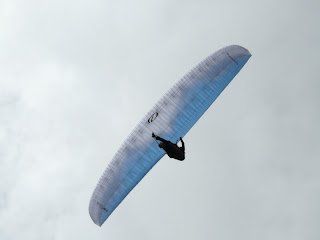 The new glider is fast, flat and smoooth with a vicious launch that snatches you off your feet in strong wind. 2hrs 40mins of boating around in the light and windy conditions. Can't wait to try this machine in the comp.
It has been raining all day....
Posted by AndreR at 04:52:00 No comments: