Most paragliding pilots dream of flying a one hundred kilometer FAI triangle at some point in their lives.  Not many get around to it.  Well folks, if you want a hundred triangle I suggest you come to Brazil because in Andradas you get to do it with almost a hundred pilots at a time.  It was an interesting day with convergence lines and fires en route.  The height restriction is proving to be pesky with several pilots being penalised for infringements.

The normal mass gaggle dragged itself around the course at a fair pace before slowing after the last turn-point before rushing into goal with sixty completing the task within ten minutes of the leader.

Gilmar Couto won the day and Yael was the first woman in goal.  The overall results are compressed to the point where predicting a probable winner would be purely speculative.  Consider the first fifty pilots are separated by less than one hundred points with four potential tasks to follow.  I still think Raffael Saladini is in with a shout but there are twenty or more who could do it based on the days to come. 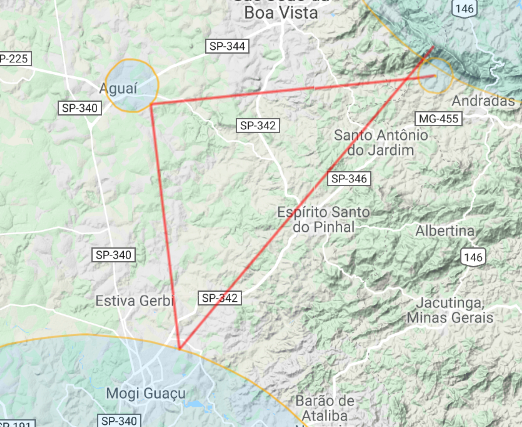 As for my own performance? I managed to get 10km behind early in the day after a terrible internal debate about whether or not to fly with the gaggle.  In the end I decided to fly with the gaggle, but it took 50km to make up the 10km deficit.  I caught them with 30km to go and then it was a cruise to goal for another solid score which has put me back in the game.  It's not that I don't like to fly with the gaggle.  I actually love it and the crowded thermals don't bother me.  I just prefer to go my own way as in the classic 1977 Fleetwood Mac hit "You can go your own way".  It just doesn't pay off so I'm gonna try a little harder now that I'm warmed up.