It has been almost ten years since I was last in Ager.  I attended a British Open competition on a Boomerang 4.  It was particularly memorable on account of the fact that Fernanda and Sebastian were with me.  Sebastian took his first steps at the age of ten months on the grass of the campsite that is the venue for the headquarters.  I always said I would come back to this magical place, and now the world cup has delivered on that wish! 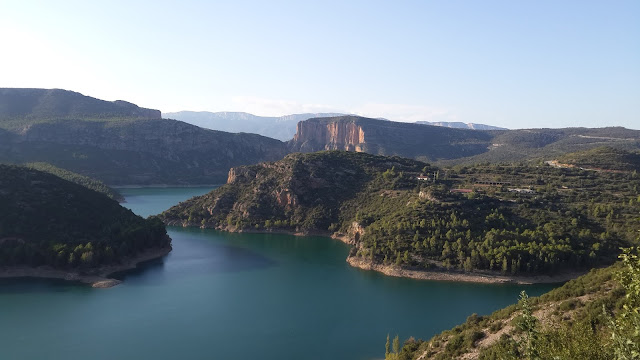 The view from the road on the way to Ager

Àger is a municipality in the comarca of the Noguera in Catalonia, Spain.  It is a picturesque little village of around three hundred inhabitants.  Catalans speak Catalan which evolved from Vulgar Latin around the eastern Pyrenees in the 9th century (wikipedia).  This is no reflection on the residents who are warm and friendly to the world-cup-horde who have temporarily swelled their population by a third.

If you ask them they will tell you they are Catalans as opposed to Spaniards.  It is supposedly the same farther north in the Basque country.

It is dry and hot.
They grow olives here.
It is good to go to countries where they grow olives if you are an olive connoisseur or a paragliding pilot.

This basic olive growing requirement has ensured a high fly-to-drinking-in-the-rain ratio since it was applied to my comp regime.  Simply put (i.e. according to wikipedia) olives are grown in Mediterranean regions of of the world.  The Mediterranean climate is characterized by warm to hot, dry summers which is why it is good for paragliding.  A dry Mediterranean summer is defined as having less than 30mm of rain per month.  I call it the Oracle of Olives.

As in all things there is the yin/yang thang.  If Olives be the yin in Spain, then the yang is the Competitive Paragliding Curse.  The harbinger of the improbable with the power to terminate drought and flood alike! There are many examples on several continents. Some will recall the floods in Manilla, Australia during the 2005 world championships.  Many more will remember Baixo Guandu in Brazil more recently.  The comp was moved to Govenador Valadares because of severe flooding that made it impossible to travel to Baixo by road.

It came as no surprise then that the Comp Curse has had a go at the Oracle of Olives:
The cold front arrived abruptly, as forecast.
The twenty knot winds announced the front amid crackling thunder and splintering door slams, as forecast.
The 6.5mm of rain briefly lashed our quaint little village in fretful angled sheets, as forecast.
The entire field cursed the curse, as expected.

All is not lost as the Oracle has intervened staving off disaster.  The result: lady Olive has delivered three consecutive days of flying!

The practice day was smokingly good.  Virile lift everywhere with light winds.  You could fly all day and into the night with the last pilots landing some time after 8pm.

There was some pessimism about the front prior to the first task.  This was unfounded as we romped our way around the sixty something kilometer course in just under two hours.  The whole affair was kept in front of the ridge.  The task committee appeared to set the task so that we would not fly too close to the ridge for too long as has become habit at world cup events for some unknown reason.

The day was not good enough to honour this cunning plan as we ended up really close and personal to the rocks and ridges for pretty much the entire race which saw nearly one hundred pilots into goal.  The first sixty pilots were separated by ten minutes or so which has also become the norm.

The second task really did look like it was in danger of being cancelled.  Not many were convinced with the cloud base well below launch height and significant wind expected.  Lo and behold a little task of forty kilometers was set in the front of the ridge.  It required a launch above cloud base with some ducking and diving to get down through the gaps to below cloud-base in order start the race. 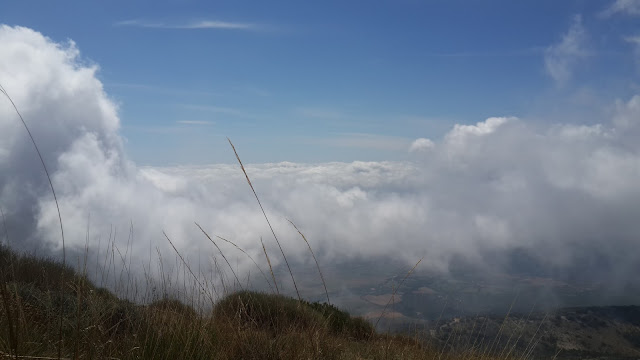 Waiting for a task above cloud-base


The start was a little messy with multi-level clouds forming and dissipating while one hundred men and women tried to avoid one-another in the misty wisps.  Nearly another hundred pilots made goal with the victor taking less than an hour.  This time, only six minutes separated the first sixty pilots.

The result of two small tasks? The first thirty pilots are separated by one hundred points on the overall rankings: http://pwca.org/results/results/index.htm?ts=150412193453

It may not be epic yet, but at least we are flying!