Three practise days yielded no realistic record prospects but we did manage some interesting flights which included a fairly satisfying run to the south of the Porterville ridge followed by a crosswind crab to Pieketberg with AndrewS and RusselA.  That the R11 is supreme is beyond question as was brutally demonstrated into wind on the ridge where the IP6's were a minimum of 16 km behind having completed only 14km.  I guess I need to 'get over it' as Andrew insists, but I lament the pleasure and performance of the greatest flying machine ever invented and regret not being able to demonstrate it's beauty in competition.
My 50km FAI Triangle attempt was diabolical in every sense of the word.  There are certain conditions in Porterville where flying on the ridge can be construed as problematic and this was one of them.  I managed the first 13km in 27 minutes followed by 22 km in 20 minutes which was well under record pace, and then I stood still in the Southerly which had cranked up to 'fresh'.  I eventually limped back to Rob's house at a paltry 25km/h claiming nothing but my free beer from Rob.
The first task was set for 55km of intrigue and experimentation whereby the task committee sent us south for the start before a tricky 44km radius turn point that bisected the ridge @ roughly 45deg followed by a linear course line down the valley to the north with goal (P4701) beyond Eendekuil on the way to Rhenosterhoek. 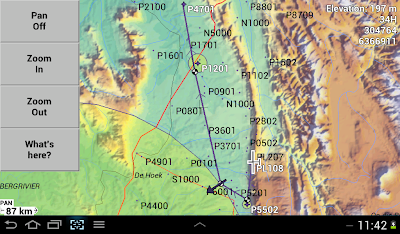 The inversion broke to my advantage before the start allowing for an effort free start and subsequent romp to goal via two turn points with a strong sprint finish in the convergence for some of us.  Africa's Finest (our team) enjoyed mixed fortunes with two of us in the top 15 and the other half landing short or experiencing some navigational issues.
It looks like we may fly every day so it's a looong way to go but I will bank a task win anytime and anyhow.  With luck the lead out points will go my way too.
I don't know when the results will be out but have a look here: http://www.xccomps.net/
I have some video footage which I will try edit tonight but without decent 3G coverage I can't promise anything.
Flight stats:
Max climb 1s: 6.2m/s
Max climb 10s: 4.6m/s
Max speed: 71km/h
Max Alt: 2008m ASL
Total Climb: 6,900m
Task: 55km
Effective glide : approx 8
Time 1h39'20''
Ave Speed: 33.3km/h (medium pace) 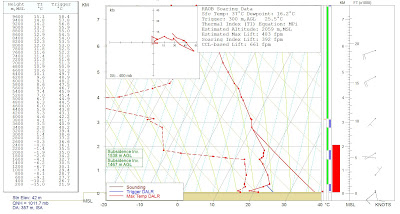 Mister AndreR, first of all congrats, but secondly, do you mind sharing where you get the emagram/skew-t from ? it looks nice ;-)

I am using RAOB 5.9 with a license for the Analytics model which includes some rudimentry soaring functionality. You may find the latest version has more: http://www.raob.com/