After months of rumour and speculation SAHPA has published an ‘official’ decision on the terrible lost love triangle between the troubled competitor; the duped administrator; and the difficult land owner.

For those of you who missed this astonishing missive, I invite you to read (between the lines if you can) and comment. It so happens that I volunteered to ‘mediate’ in an attempt to resuscitate both the AAO and the PWC which were planned for 2009, so feel free to ask any questions around my failed involvement.

For the record you should know that this was only the second time in the history of the PWC that a world cup event was cancelled. This is a stupendous achievement on our part. In the eyes of the competitive paragliding world we are now effectively relegated to the rarefied elite class of fractious goat herders who have gorged on their own faeces and allowed the feta to run rancid.

I cringe at the thought of having to show my face at the next world cup event I attend where I will hang my head in shame and apologise profusely to my world cup friends whom I have for years regaled with wondrous stories of our great and hospitable nation.

The question we should ask ourselves is how on earth did we allow any of our governing bodies, who purport to represent our best interests, to destroy our competition scene so comprehensively, quickly and quietly?
(SAHPA notice - click to enlarge) 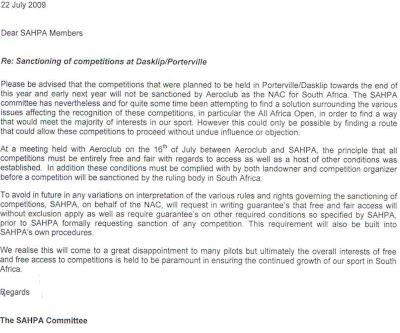 I hardly understand a single word in the babbling of the SAHPA attached note. I so much enjoyed AAO2007 and expected so much to return to SA. Wasted excitement, a real pity. Wasn't it the first PWC supposed to be held in Africa? How come SAHPA is still advertising PWC and AAO on their website, competition section?

Hope to see you soon anyway,

Nice to hear from you. Yes it was going to be the first world cup in Africa, so it is seriously dissappointing to lose it thanks to one or two selfish and aggressive individuals.

What is even more frustrating is that the SAHPA members have mostly been kept in the dark about what actually happened and now there is all kinds of soap box speculation and insinuation by some notable 'cheerleaders'.

I guess paragliding administration sucks the world over.

Do you know how many of the European pilots who were planning to visit Porterville this year are aware of the fact that the comps are not sanctioned by our NAC?

Until last PWC event two weeks ago in Croatia I (and all other European pilots) genuinely thought that the event had been postponed from December to January or February.

It is only in the middle of the comp that a provisional calendar has been displayed, not mentionning at all Porterville. I cannot tell if everyone then realized that SA went AWOL!

And I personally know several French pilots intending to go to AAO. I may tell them it will not be sanctioned by FAI as level 2. That definitely could cut their interest in traveling so far.

Hey Andre!!! Have you heard???!!!! SAHPA is regressing it seems!! It looks like the CAA criminal genius test pilot and self-acclaimed paragliding guru and dog's gift to lesser mortals, Ronnie Beukes, has launched his 2012 SAHPA chairman campaign!!

Yeeeeehaaaaa! All we need now is to have the Wilderness village idiot brothers join the committee and our lives will be complete! With luck these idiot savants will repeat the same Sad Storie as the head clerk at Aeroclub and be elevated to higher orifice. Who knows, they may even achieve the ultimate ascension to pale white male aviation immortality and join the great white Elephant status of RAASA!!!

Ach please Andre won't you save us from this trauma and run SAHPA again?

Yours in jest
Boer Seun Soutie