Win One!?
What a rush, and what a relief! After the Sun Valley experience, I wrote that a podium finish at a world cup event was something on my bucket list. Right at the top of that list for paragliding was a world cup win, and on the list that 'no-one mentions' is the wish to win a world cup at home. It took ten years of preparation, a seriously awesome glider and two ounces of luck, but a win is a win and I am relieved. The thing about a world cup career is that most could be satisfied with a top ten finish, or maybe a task win or even a podium. Once you have achieved those you wonder if it will ever happen and how would it be to look back and be ok with never having won an event outright. After my pitiful performance in Colombia I was suffering some serious doubts staring down the barrel of 'not-good-enough'. 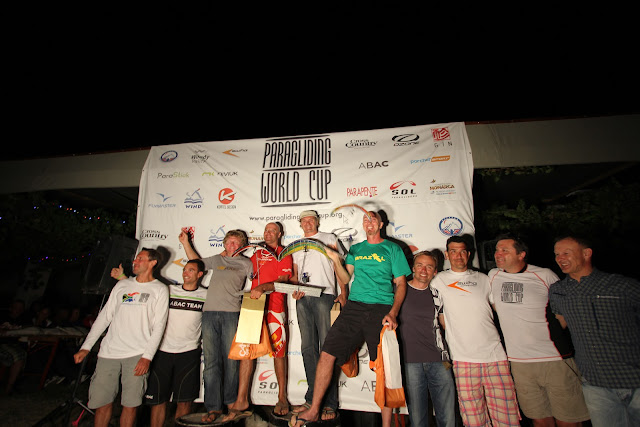 photo: Sergio Kawakami
Stress
I now understand the stress I observed among the US pilots in Sun Valley last year. It seems that all the whining and moaning is amplified when you are involved in hosting the event. You become aware of the abuse that is absorbed by the organisation along with interference from the association. Couple this with unreliable forecasts and dodgy flying conditions and a helicopter evac on the first day and you have some real tension.
I was on the task committee with Andrew Smith and Chris van Noord. We were up at 7am every morning trying to decipher the met reports in preparation for the day. Cold fronts do their own thing, so the second and third day we tried to set tasks for twenty knot winds from three directions. The task committee was bizarrely instructed NOT to use the ridge after the first day crash which saw us on the ridge in the mildest conditions we have ever had! We were totally like WHAT!!?? we have been sending our novice pilots romping down the ridge regularly in local competitions over twenty years! It turns out that one or two competitors were agitating strongly to fly the flats exclusively and were lavishly dishing out septic doses of negativity to all who would listen. Perhaps they were upset at not being selected for the task committee and thought they could do a better job although I have serious reservations about sending pilots into the Citrusdal valley in strong westerlies as happenned the week before.
In the end the association backed out of the ridge ban after the pilots signed a petition complaining (believe it or not). Even then we flew flat lands mostly. Imagine telling us to 'use the ridge, but not for racing'. It's Porterville for heaven’s sake! There is a sixty kilometre ridge designed for racing!!!!
In the end we flew seven out of seven with one cancellation and a hugely controversial stopped task.
While we're highlighting the negative: I was left with a bitter taste after conspiracy theories and accusations of cheating by some. I was officially weighed with threats of being weighed every day simply because a gaul refused to believe that my towering bulk could fit a medium wing at 115kg.
I was second by eight points behind my old Porterville rival, Pepe Malecki, going into the last day. There was a whole pack of hungry wolves chasing. In my estimation, any one of the top ten were in range of the podium. I recused myself from the task committee and we were given Clan William with a couple of twists. This was a hundred kilometre race with multiple options at the start, at the crossing and for the finish. You could not ask for more variety in one day in a world cup. This translates into huge stress for the podium hopefuls because it was impossible to manage the gaggle as would normally be the case in a world cup. All you could do was to be efficient and hope your line was good. In the end we all met up in the same place for the twenty kilometre finish but split into three groups on different lines. The western group took the day by five minutes from my group on the easterly line. It was so close that no-one knew what the probable overall result was and I was convinced I had not done enough. Imagine my delight at prize giving.
The (long, skinny, sexy, awesome) Glider
I was fortunate enough to get a Boom 9 on loan and found out later that it belongs to Adrian Thomas which he so very graciously agreed to let me use. Now this is no small thing given that he had not yet flown it. Many thanks to Gin, Petra, Adrian & Cal for getting this machine to me in time.
Precisely contructed, beautifully finished and perfectly balanced, the Boom 9 felt familiar which should not have been surprising given that I have enjoyed many firsts on Gin gliders: first comp wing (Boom I); first cascade (Boom II); first comp win (Boom II); first 100 & 150km flights (Boom I). My Boom 4 gave me at least one comp victory after a layoff of several months when I trashed my knee in France. That was a prototype which was glued together at the span wise colour interface on the top surface. The late great Norman Lausch used it at the world championships in Brazil in 2003 and I begged Gin to sell it to me after the comp. It is tucked away in a cupboard somewhere.
The superiority of the Boomerang 9 is subtle in the sense that the cliché holds true: the whole is so much more than sum of the parts. You get the sense that you can climb marginally better than most. You discover you have an almost imaginary better glide and you sense you are slightly faster during the sprint. Even more subtle are the apparent height gains in choppy air. There is nothing dramatic, just a constant sense of well-being as you end up on top of the gaggle and arrive highest after glides.
The performance is amplified into wind which is where you confirm your suspicions.

It was almost strange to be in a tight gaggle with four or five Boomerangs every day which is notable given that there were only six of them flying. How exactly they managed to get such a high aspect ratio glider stable is beyond the understanding of my amateur status, but I suffered no serious malfunctions save one asymmetric collapse at half speed that required little input and a voluntary 360 degree re-inflation turn.

You do feel the aspect ratio in comparison to the IP6 which is expected, but one thing I realised is how much less of the speed system I used during the competition. The speed system was 100% on or off on the IP6 as opposed to incremental on the Boom 9 reminiscent of my R11. All in all a highly pleasurable experience on the Boom 9 and I have serious doubts that anyone is going to be able to improve on this blade anytime soon unless there is some way to certify an R11! I see the test pilots are in revolt again which doesn't help the Boom 9 competition http://www.xcmag.com/2013/03/air-turquoise-refuse-to-test-en-d-competition-wings/.
In closing we should thank Waldo and everyone who assisted for putting on a fantastic comp.
Posted by AndreR at 04:35:00