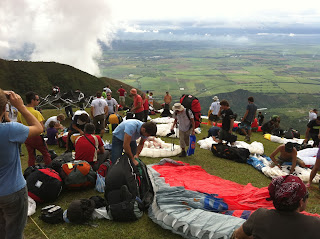 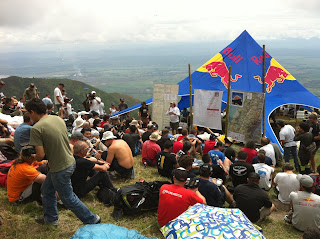 The day dawned heavy and ominous, the sky pregnant and bereft of promise.  Or so it seemed to my jet lagged aching body rudely awakened while the entire field was ferried up the hill at an ungodly hour of 7:30. .. and then they set a 120km task (90km nett)!!  A couple of red bull shots delivered by a ‘bull babe’ and accompanied by a spanglish speech extolling the wing giving ability of the toxic brew woke me up and in the mood for flying as the day rapidly improved.  In summary if you were late earlier on you got spanked which punishment Andre received and Russel avoided pulling one out of the bag for team SA making goal with the 30 or so skygods.  They start the day early because the launch is essentially in the lee of the ever present Sea Breeze which is briefly held back by local thermal activity until about mid-day where-after you get flushed if you’re dumb enough to be anywhere near the ridge.  Provisional results Russel 29th and Andre 46th.  Our favourite Brit, Russel Ogden probably took it if Mickey doesn’t steal it with lead out points.  Nick, Josh, Pepe and a host of French along with some other usual suspects were all in. Then again I guess at these events almost all of the pilots could be considered ‘usual suspects’… such is the standard.   Stephan Drouin managed to survive a 40m drop after hitting power lines which destroyed his glider.  No other incidents as far as we know.

Russel’s experience:  ‘Messed up the start, fixed the middle and survived to the end. Scratching skills now honed’.

Andre’s experience: ‘Stuffed up the start, messed up the middle and died in the end.  Hiking skills now honed’.

All in all a wonderful day of flying with the rest of the week looking promising.

Quote of the (yester)day from Frankie Brown receiving massage from no less than FIVE pretty Colombian attendants: ‘I don’t think I can handle five, but I die trying’.

Looks like a fun place to fly! Enjoy while we're being washed away here in SA...