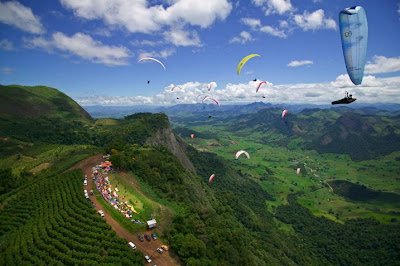 Tuesday 29 September 2008.
General Schmidt reporting.
Today had a good looking start, puffy cu's @ 1500m ASL (ground at 100m ASL). East wind to the south into the teeth of the predicted sea breeze. A fantastic start over the huge cliffs alternatively soaring and thermalling. As I was pushing to make up from a less than perfect start, it was great to see a blue and orange Mac leading out aggressively at base. Things all came to a grinding halt at the first turn point, with the entire field 150m above the ground groveling in the stable sea air.
Nice cruising low over the green countryside and I joined up with the lead bunch at the second turn point. More on this later. While pinned with fifty other pilots between 150 - 200m ASL with towering trees and vultures for company, it was uplifting to see puppy coming in 500m above clicking the turn point and moving out. Only half a dozen managed that, the rest were left in deep piles of poo.
Andre went on to get a narrow 2nd place behind Urban Valic after five hours of slog. Total of six in goal. WELL DONE PUPPY!
In the meantime, back in the hole. Bitten. Chewed. And spat out by the rotor monster. Many times. Until after forty minutes, most of the bitter-einders elect to land. Thus clearing the way for the more foolhardy to dive deeper over the town and into the gorges. I still have stretch marks around the eyes. It didn't happen for any of us because we couldn't crack the sea breeze inversion, so happy puppy did it.
Posted by AndreR at 16:21:00

WOOOOOOOOOW, well done my sweet. I am SO, SO proud of you. Next time, please take your captain along...

Good luck to both for next task, keep it rolling!! love f

That is a cheap one, using OLD pics form other comps and other people!!

Oh come on Abe - don't tell me you guys have missed the little Brazilian girls in grass skirts holding up the SA flag at the opening ceremony!

Not sure where our Skygods were.

Lots pics on the host site :-)